Greenstorm Foundation Photo Competition on Nature in Neighbourhood: 100000 in prizes! 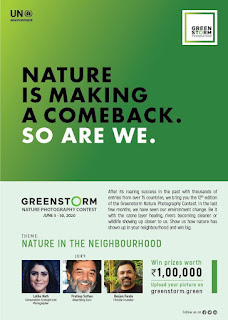 Good Morning, World Environment Day is another reminder for us to spare a thought for Mother Earth. For the past 11 years Greenstorm has engaged millions of creative minds across the world, urging them to express their love of nature while spreading the message to preserve it. Now, the Greenstorm Nature Photography Contest is back again with its 12th edition.

This year, as we’re bouncing back from an unforeseen pandemic, one thing that has stuck out is how the lockdown has helped nature heal. It is with this in mind that we have chosen the theme for this year - Nature in the neighbourhood. You can participate by clicking a picture and uploading at www.greenstorm.green. There are cash prizes worth Rs. 1 lakh to be won. Join the contest. Share the message. Environment Day Greetings from Green Storm Foundation!

Posted by Ranjan Panda at 1:12 AM No comments:

Application Invited for MSc study program in Global Change Ecology at University of Bayreuth
Application Deadline: 15th June 2020
Teaching language is in English. Accepted candidates do not have to pay tuition fees.

FYI the message we have received from the above university with a request to spread the advertisement.

Message below from Carl Beierkuhnlein, University of Bayreuth, Germany

We would like to advertise the upcoming application deadline this summer for an attractive and intense international MSc study program in Global Change Ecology at the University of Bayreuth in Germany. Either you in person or bachelor students and graduates around may be interested in this qualification.

The program is devoted to understanding and analyzing the most important and consequential environmental concern of the 21st century; namely, the ecological consequences of Global Change, especially the effects of climate change and biodiversity loss. One of the program's focus is the linking of natural science and socio-economic perspectives. The international program is realized in close contact with research institutions, NGOs and companies and administration. Our study program has been acknowledged by the United Nations as an observer organization. During the last years, we received applications from more than 70 countries.

Teaching language is in English. Accepted candidates do not have to pay tuition fees.
Applicants from any academic background that is related to the scope of this study program are welcome to apply. Applications can be uploaded on the Online Application portal.
The deadline is 15th of June 2020. Please check the link below for application details:

We encourage and appreciate you to disseminate this information! Our coordinators will be happy to assist candidates in their application if something is unclear.
===

Posted by Ranjan Panda at 7:05 AM No comments: 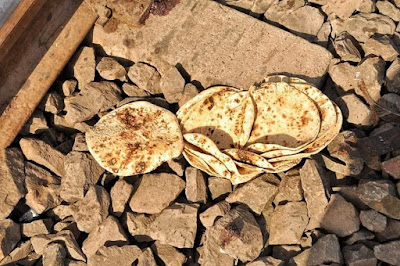 The Indian Roti at Aurangabad

The state said it had waged a war against a virus. Just within 4 hours the poor #MigrantWorkers realised it was turning out to be a war against them as well. They feared, hunger will kill them before Corona. It in fact did. The Roti that they somehow had gathered to fight against hunger turned out to be a useless weapon when the train crushed them. Now the state will ascertain the cause of death. Some have already raised the question as to why these fools slept on the railway track. Some asked, why were they walking for hundreds of kilometers even as all of us are advised to 'stay home, stay safe'? Genuine questions! But were not they trying to do exactly that: trying to reach home so that they can stay safe? Now, as the state is trying to ascertain the cause of the death, what would be the result: Suicide? Hunger? Corona? Apathy? State? Ask this question to yourself while ordering your Biryani from Zomato or flaunting your culinary skills on social media. Your answer has a lot to do with future of this country.

(Pic: Roti that were given as a matter of charity, and not as a Right to the migrant workers falling on the railway tracks as a goods train crushed 16/17 of them to death at Aurangabad. They were walking down from Maharashtra to reach their village in Madhya Pradesh as India failed in taking care of them.)
https://twitter.com/ranjanpanda/status/1258982676087762946?s=20 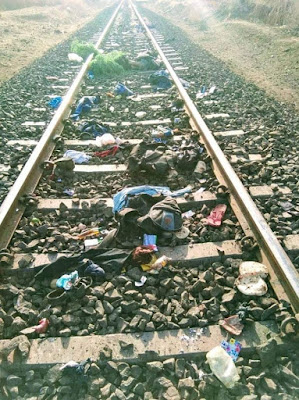 We as a nation have lost our conscience for sure. We have failed our #MigrantWorkers who build our dreams, our cities. We have left them to die in many ways. These 16/17 workers were run over by train, many have died of exhaustion on road and the nation has died several deaths! https://t.co/umIRxr1zax

(Both photos are from social media.  Photographer unknown)

There is no planet B and Covid 19 is not the last pandemic! Better behave, humans!!

There is no Planet B and Covid 19 is not the last pandemic we are facing! Better behave and revamp your growth models, humans!!!
Humans have concentrated so much on their survival and progress that they have forgotten the very root of their existence: Mother Earth. Well, now you have to drain all your money, gotten at cost of natural resources & other species, just to survive one pandemic. More to come!

(https://twitter.com/ranjanpanda/status/1250681688683732993?s=20 )
We need to orient more towards a #GrossEnvironmentProduct kind of an economy than current one. 1 thing is clear, we have lost our right to progress at the cost of nature, other species. We can't boast about being the superior animal unless we grow in an inclusive & equitable way.

Ranjan Panda
Tweets @ranjanpanda
Posted by Ranjan Panda at 12:29 AM No comments: 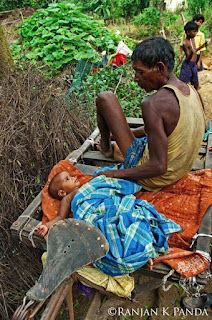 A new study finds out that climate change is making stronger El Ninos, which change weather worldwide and heat up an already warming planet.  Examining 33 El Ninos since 1901, the scientists who conducted this study found that since the 1970s, El Ninos have been forming farther to the west in warmer waters, leading to stronger El Ninos in some cases.

A powerful El Nino can trigger drought in some places, like Australia and India. And it can cause flooding in other areas like California. The Pacific gets more hurricanes during an El Nino and the Atlantic gets fewer.
Read further here: http://bit.ly/2o7Me4t

Posted by Ranjan Panda at 9:44 AM No comments: 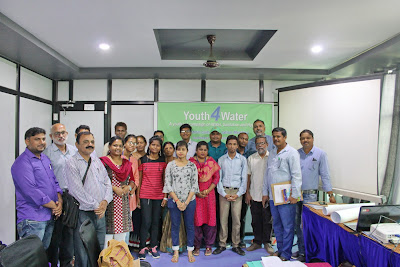 Sambalpur, Oct 21, 2019: At a time when in several parts of the planet youths are leading efforts to raise awareness on climate crisis, Odisha youths vow to start a campaign to raise awareness and action on water crisis in the state. Concerned about the water scarcity and sanitation challenges that the state faces, and knowing well that climate change is already aggravating the problem, an inception meeting of the ‘Youth for Water’ campaign was organised here on Sunday under the leadership of Odisha’s Water Man Ranjan Panda in order to involve youth in chalking out strategies to address these critical issues. People from across the state, mainly youths and their mentors from five districts, attended the meeting organised by Water Initiatives Odisha (WIO), a consortium of civil society organisations and concerned citizens, local youth-based NGO Patang and Unicef, Bhubaneswar office.

The meeting decided to reach out to and mobilise at least a thousand young people initially from various colleges, universities and associations on water, sanitation, hygiene (including menstrual) (WASH), rivers, environment and climate change issues for bringing positive change in their behaviour and organising common action initiatives.

Addressing the meeting, Panda, convenor of the WIO, said, “Our objective is to build relationship between youth and water in ways that will help them understand the importance of water resources including rivers and other surface waterbodies, groundwater and the entire ecology that will help them work towards conserving these resources so that they can ensure a water-secured future for themselves. We as mentors will assist them in achieving this goal.”

“In the coming 10 months, we will be focusing more on activities related to WASH. Today we have decided to identify and build capacities of select young people to be “Safe Water/WASH” ambassadors in their daily lives so that they can be the change makers and mobilise their families, neighbourhoods and institutions in joining the efforts. We have also decided to engage these young people in online and offline activities for campaigning on water and related issues, Panda added further.

“We will be expanding the scope of this campaign and seeking collaboration of other institutions to be able to reach out to all the youth of the state gradually,” he pointed out.

Within the next 10 months, specific activities will be organised in 10 colleges/localities spanning five districts – Bargarh, Mayurbhanj, Nuapada, Puri and Sambalpur – and will spread to other districts gradually. In the meeting, the volunteers chalked out plans to involve youth through various actions both in their institutions and communities. ‘Youth for Water Club’ will be started in such institutions/places to engage the local youth through innovative actions throughout the year.

It may be noted here that the idea of ‘Youth for Water’ campaign was conceived during the 3rd Odisha River Conference, organised by WIO and 35 partner organisations, at Baripada on 24th-25th March this year. Youth representatives from across the state took part in the Youth Conclave as part of the conference and raised concerns regarding the increasing water crisis and the growing detachment of youth from important ecological elements like rivers and forests. After much deliberation between the youth and experts led by Panda, it was decided to roll out the ‘Youth for Water’ campaign formally.

Panda has appealed all sections of the society to join this unique initiative and help youths accomplish their goal of a water secured future.

Posted by Ranjan Panda at 5:23 AM No comments:

Email ThisBlogThis!Share to TwitterShare to FacebookShare to Pinterest
Labels: #Youth4Water, Our Campaign 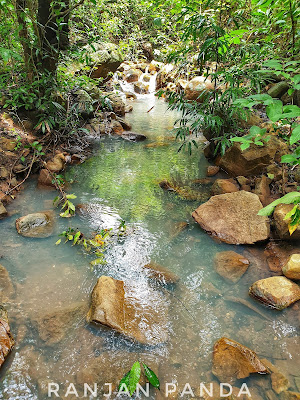 Last week I visited the indigenous communities in a small village located at foothills of the transitional zone of Similipal bioreserve.  I went there to understand how these nondescript communities, who are far away from the so called modern civilisations and urban conglomeration, have restored a natural biodiversity rich forest of almost 555 acres from a state of severe degradation just in a period of 13 years.  What their effort has done is also to revive the natural streams that now bring pure water not only to meet their drinking water needs and irrigate their crop fields but also to feed more water to the Budhabalanga river.

As I share this picture of the beautiful and pure stream (one of the four major ones their efforts have revived), free from any pollution, data from the Central Pollution Control Board (CPCB) warns us how the polluted stretches of India's major rivers increase from 151 in 2009 to 351 in 2018. Most of this pollution comes from the so called educated and modern civilisations in India's cities.

See what the indigenous communities give us and what we turn that into! From pure streams to polluted rivers, the journey is certainly not progress!!

We need to rethink our ways of urbanisation seriously.  We need to learn from the indigenous communities.

Posted by Ranjan Panda at 9:36 PM No comments:

Searching for my roots 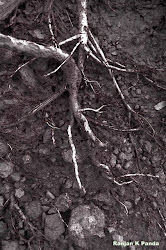 Searching for my roots